These awards are presented by a Starfleet Sector, Operational Area, or Quadrant Commander to individuals on recommendation from SIM Leaders. This Tier also contains the first level of SIM citations, which are applicable to the entire SIM & crew. 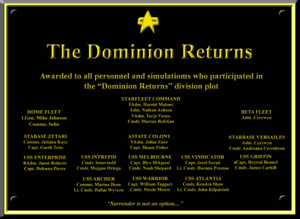 Awarded by special panel, the Boldly Go awards celebrated their inaugural presentation on the Silver Anniversary of UCIP. These special awards rank above all of the tiered awards and just under the organizational level awards. They are presented annually by the Boldly Go Committee, during the anniversary celebration, and are based on nominations and submitions to the panel. These awards are presented to players and are intended as Out Of Character awards.

This article is written from a real world perspective and as such has no effect on the canon of the universe.
Retrieved from "http://lcars.ucip.org/index.php?title=Awards&oldid=29161"
Categories: