Jess looks like your typical Scot fare skin, rosy cheeks and vibrant red hair. Her green eyes are very odd combined with her vibrant red hair but it gives her a sense of uniqueness. And it also helps balance her fare skin tone. Jess's build isn't exactly athletically built but she's also not overweight. She works out occasionally as well as eating healthy. Jess's personality is not necessarily bubbly but more light hearted. Her sense of humor can be dry, quick and sharp witted. Which sometimes doesn't carry over well but it never stops her from trying. 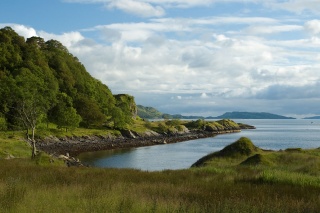 Scotland, Earth, Sol System, Alpha Quadrant, Typical sunny day in Scotland
Jess grew up in Scotland in the Invernessshire county. The county was a intriguing land area covering a large mainland and water which had several islands. The county itself had three towns Kingussie, Fort William, and Mallaig.

Mallaig is home to the Dietz family clan and they were a large clan. Upwards of 60 aunts, uncles and cousins for the extended family.

The immediate family was two sons and five daughters ranging from early 40s all the way to early 20s. Jess was the fourth child born after the eldest daughter; Clara Dietz, eldest son; Rory Dietz, second eldest daughter; Martha Dietz. The next two after Jess were twin girls and finally the last one was a boy.

Matthew was the port authority for both the harbor and the West Highland railway which was mostly passenger and freight base getting civilians around Scotland in quick and efficient manner. The harbor is mostly used a tourist destinations with a few old 21st century ferries still in working order.

The girls enjoyed going on the ferry more than the boys for them it allowed them to spend time with their father. And Matthew was all the more happy to do it as his family was everything. Rose Dietz worked up at the Mallaig university as one of the student advisors in the language department. Jess was the only one out of all seven children that enjoyed spending time with their mother at her job.

Like her mother Jess had a way with words and languages able to pick up on them quickly. Her second language was Gaelic a dead language. But at the same time everyone in the Dietz clan learned Gaelic just to honor their ancestors. But her mother noticed her gift and essentially home schooled her in several other languages.

All through high school she took Vulcan and at home her mother helped her with Andorian and Klingon. By her junior year of high school she could converse somewhat in all three. Which was impressive and why her teachers got permission from her parents to allow the academy to keep an eye on her. Her mother was a bit hesitant but father was able to talk her into it. But the deal was they couldn't speak to her until she had graduated university.

The academy easily agreed to that seeing that they wanted her most likely for a instructor position within the academy. It had been awhile for the academy to recruit someone with Jess's skills with languages. Usually the Diplomatic Corps or Intelligence would've scooped her up already luckily her family was very very protective of their children.

So by her final year of high school she was fluent in Klingon and almost in Andorian some of the phonics were still giving her trouble. But she was entering university with two languages under her belt and by the time she heads off to the academy she would have almost four (the fourth being Trill). And with her being 18 the academy was allowed to approach her. The decision for Jess was fairly simple the way she saw it staying on Earth wouldn't allow her to continue to discover languages or allow her to find one that no one has ever come across.

So right after getting her undergrad in political science with two language majors (Andorian and Trill) she was off to the academy. Where she flew through her languages courses but struggled at basic security, command and the other sciences. But she also excelled at diplomacy and the Diplomatic Corps took notice.

As she progressed through the academy several departments started taking an interest in her; the academy for professorship, Intelligence and the Diplomatic Corp was looking at her for translation specialist and than the personnel office could place her anywhere in the galaxy and she would be welcomed with open arms.

Luckily she had a very patient advisor who did help keep the recruiters at bay expect for Intelligence. Mainly cause they were very sneaky with how they approached her but she was always able to keep them at bay. But by her junior year she was forced to make a decision knowing that whatever choice she made those others doors were always open. So her decision was to work in a position that allowed her to work with all those divisions that would be a attaché for Starfleet wherever she was needed. Which mostly was Starfleet Intelligence or the Diplomatic Corps.

Jess's first posting as an attaché from the Diplomatic Corps acting as a briefer for Nick Vera the briefer for the director of the DI-IDD (Department of Intelligence-Intergalatic Issues Department). Jess remained in this position until she was promoted to lieutenant and lead briefer. While she was working as the lead briefer she was working on learning communications especially on the DS-C (Department of Support-Communications). This led to another promotion to lieutenant commander and a new assignment as deputy director of Starfleet Communications working closely with the DS-C mainly to help keep Starfleet communication networks secure. This is also where she met at the time lieutenant junior grade Herschel Hohstadt who was serving as the DS-C liaison in communications.