239904.05 - Joseph Lansine charged with treason against the Federation

239906.01 - Starfleet JAG finds the senior Lansine guilty on all counts; dishonorably discharged and excommunicated from the Federation

240205.02 - Rob learns the of the actual charges against his father and leaves his father in disgust

240309.22 - Moves into Apartment outside Starfleet Academy

241006.20 - Federation Rescue Vessels transport Lansine and other Carida survivors back to Federation Space

241105.02 - Promoted to Lieutenant Commander and recalled to Starfleet Security as a Special Adviser to Starfleet Academy

241108.31 - Reassigned to the USS Vindicator as Executive Officer

Born on September 4th of 2486 at Starfleet Medical Adjunct Terra 12 in Minneapolis Robert grew up in what most consider the typical Starfleet family. His father Joseph Lansine served aboard the USS Pandora as the Chief Science Officer while his mother worked from home as a Starfleet Medical Researcher. Growing up in a family with connections in Starfleet as long ago as the NX-02 Columbia, Robert was ingrained with a strong feeling of commitment to his family's line of officers.

During his elementary schooling days Robert and his family lived the typical Terran lifestyle and enjoyed their position in the community. Robert's mother was a respected researcher and his father was one of the highest regarded researchers for the Daystrom Institute. Robert and his sister Rebecca attended local schools and participated in many activities--by all considerations the Lansine family was 'normal'.

The fairy tale would come to an end in the summer of 2399 when Joseph Lansine was indicted for treason by the Starfleet Judge Advocate General's office. The Lansine family was ravaged by the constant attention from the press, Lisa was forced to relocate back home with the children away from Starfleet Headquarters and both kids changed schools the next fall. Starfleet, concerned with the threats the family was receiving, attached a security contingent with each of them during the remainder of the trial. During the next two months Lisa, Robert and Rebecca would live under lock and key away from Joseph and the rest of their old life.

The trial concluded in a bit of fanfare when the Lansine family was allowed to attend the final hearing. When the guilty verdict was handed down after a final deliberation between the three JAG Commanders a look of terror swept across their faces--their father would no longer be able to live on any Federation member planet of colony and would be dishonorably discharged from his service in Starfleet. Rob, only 13 at the time of the trial, was devastated. The man he'd admired his entire life was no a criminal. The emotional roller-coaster that followed the trial ultimately split the family apart, Rob leaving with his father to Orion IV, a colony outside Federation jurisdiction, while Lisa and Rebecca stayed on Earth. 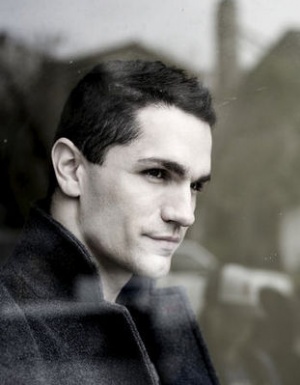 It only took a few weeks for the Lansine boys to arrange their change of residence and only four days at Warp 8 to reach their new home. Orion IV was exactly as Rob had pictured it when his father had told him the location of their home: dirty, riddled with crime, and in almost every comprehensible way, the opposite from what Rob had grown up in on Earth.

The first few months proved to be more than difficult for Rob who often found himself on the wrong side of a threat or the victim of petty theft. However, despite his problems early on Rob would soon begin melding into the way of life on Orion IV as he found a man named Walz. Walz was a human ten or so years younger than Rob's estranged father and he dealt in a variety of goods and services in and around Orion controlled space--some less legal (in the terms of the Federation) than others. Unbeknownst to his father, Rob began working for Walz in a small capacity in 240003 and worked his way up through the crime lord's cartel of illegality for two years until Rob accidentally stumbled upon information from a Federation woman traveling through the sector. Pieces of information regarding Joseph Lansine's trial were declassified as early as one year after their departure from Earth and after he was informed by the woman of what his father had actually been charged of it infuriated him: his father hadn't only been charged with treason but for the negligent homicide of six of his former colleagues.

Without returning home that evening Rob boarded the Federation transport that the woman had come to Orion IV in and left the planet for good. Never speaking to his father or Walz again, Rob set out to redefine himself.

Return to Earth and Starfleet Academy 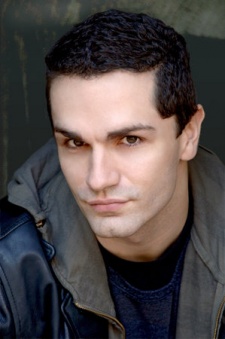 Rob at the Academy.

After spending several months on several passenger and cargo vessels, Rob returned to Earth in the summer of 2402. Upon disembarking from the San Francisco space port Rob felt the urge to rush back home to his mother and sister. It took Rob two hours of walking around the terminal to clear his mind and decide to instead take what little things he had to an apartment complex he remembered an old friend lived at. The Academy Chateau was only three blocks from Starfleet Academy Headquarters, and Rob lived there, maintaing a small job at a coffee house to keep his landlord happy. Once the fall semester at the Academy began Rob began meeting dozens of eager cadets; a day didn't go bye that one of them didn't urge him to enroll. Each time Rob graciously declined, but below his bitter feelings toward Starfleet sat a desire to prove himself. His father's sins had defined him for the better part of his teenage years and now he was finally in a position to step out from beneath his shadow.

That fall Rob enrolled in a series of pre-academy courses designed to bring him up to speed with what he'd missed since leaving Earth. Despite having no formal schooling since junior high, Rob had managed to stay moderately stimulated on Orion IV through several different means. When the Spring semester began the next year Rob was accepted into the Academy and began an accelerated program to graduate with the class of his correct age. Through his own academic rigor and sleepless nights of studying, Rob graduated the Academy on 240812.05, taking only one and a half years to complete his three year program.

Upon graduating the Academy and passing all post-graduation formalities (including indepth background check and psychological evaluation) Rob was assigned to the USS Intrepid-D as an Assistant Security Offer on SD 240904.01. While serving onboard the Intrepid Rob received his officers commission, was promoted to Lieutenant Junior Grade and promoted to the position of Chief of Security. 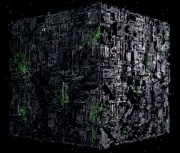 The Borg Cube that attacked the Intrepid.

Only a few weeks into his first tour onboard a Starfleet vessel Rob and the rest of the Intrepid's crew were attacked by a Borg Cube during a mission to contact several Federation Scientists researching Borg Nanoprobes on a remote colony. During the battle Rob was injured when his turbolift dropped 15 decks. Before returning to duty the Intrepid's EMH demanded Rob wear a coritical monitor to track his neurological activity in case of a concussion or other lasting malady. The monitor was later used against the Cadet when the Borg used it as an interface into his mind, manipulating him to attack several members of the crew and nearly disable the ship's shield grid. Fortunately for the crew, Rob fought his way out from under the control of the Collective and severed his link to the Hive Mind.

In later investigations the Commanding Officer of the Intrepid Innovindil Valenar and Starfleet Command found Rob innocent for his attacks while under the Borg's influence.

Rob chose to betray the trust of his best friend Landon Neyes to shed light on his father's past in Starfleet. 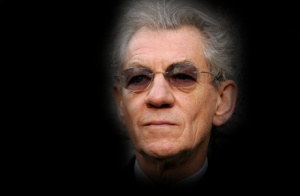 Walz, a man without a lastname, or at least to Rob's knowledge. He was a moderate player in the Orion Syndicate and was Rob's handler while Rob lived on Orion IV. The two reunited in the summer of 2409 when Walz offered Rob a job spying on Landon Neyes in exchange for information about Rob's father.

For a detailed account of the following story please read:

Immediately after returning to Starbase Versailles for repairs following the conflict with the Borg Rob found himself face to face with Walz, and though their relationship was a strange and at times troublesome, he was essentially Rob's second father during his father's self-destructive days on Orion IV. The two quickly caught up and Walz offered Rob a job, one similar to those he had completed during his teenage years on Orion IV, in exchange for information regarding his father's recent death and information regarding his prior work in Starfleet. Walz' proposition ended up requiring Rob to spy and essentially extort information from his best friend on the Intrepid Landon Neyes. Rob's plan to complete his mission while keeping Landon in the dark as to his identity ultimately proved to be too much as Rob was outed late in the mission.

Despite Landon discovering his identity Rob still got Walz' information from Landon (voluntarily). However, before Rob could deliver the information Walz' was confronted and killed by Lieutenant Alistar McKeon, the Intrepid's Intelligence officer who had prior history with the cabal leader. With no dealer, Rob never delivered Landon's information and the Ferengi who contracted Walz to retrieve it were never wise to Landon's secrets. At the conclusion of the mess McKeon gave Rob several files he'd been able to access with his security clearance within Starfleet Intelligence. Rob has sense used those files to begin to understand his father's secret life.

Orbital view of Carida. Cardassian occupied, once a Federation colony.

For a detailed account of this plot please read:

The Intrepid was assigned to evacuate Federation Colonists from the planet Cardia after diplomatic efforts with the Cardassian Union yielded the planet to them. However, the Cardassian forces in orbit attacked two days earlier than agreed and ultimately destroyed the USS-Intrepid-D leaving Rob and 47 other crew members stranded behind enemy lines with over 1,000 colonists. Landon Neyes attempted, but ultimately failed to rescue Rob and the other crewmen on 241001.21 and was forced to leave them all behind. 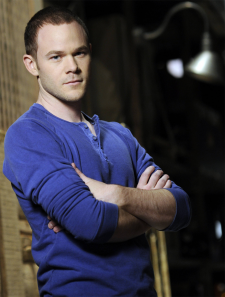 After being assigned to the Vindicator, Rob's first mission brought him into contact with the Vanguard, a faction of rouge Federation citizens and Starfleet personnel. While the Vanguard had posed a threat to the safety of the Federation for quite sometime before the conflict Lansine had never encountered the group during his career. The mission proved quite eventful as Rob found himself, alongside Landon Neyes and Hayden Williams investigating a derelict Vanguard vessel after the initial Starfleet assault. While onboard they encountered Kieran Aquila, a Vanguard mercenary communications expert. Once coming back to the Vindicator, Aquila asked and eventually was granted asylum.

After over 18 months of service aboard the Vindicator as her Executive Officer, Lansine was reassigned, despite reservations from many at Starfleet Command, to the USS Crazy Horse to replace outgoing Captain Alexia Nolan, the same officer Rob had served while still on the Intrepid all those years ago.

Lansine and his green crew of young officers was immediately thrown into the fire as he and the rest of the Horse were tasked with investigating the disappearance of Starbase 447's entire crew. Once an important post on the edge of Tholian space, the station abruptly went off the grid weeks into the new Tholian War. Unbeknownst to Lansine and his crew at the time, the events that led to Sheyma's demise were far from the doings of their Tholian rivals. Instead, a frightening investigation of the station led he and his fellow officers to the conclusion the crew had been all killed or fatally mutated by the likes of an illegal weapons research project headed by Commander Daniel Harkins, the same man Robert's father had worked with nearly 20 years prior.

Robert is played by: RV