What is the Starfleet Intelligence?

The Starfleet Intelligence Agency (SIA or SFI) is the branch of Starfleet tasked with gathering and analyzing information concerning its own peoples, when necessary, and neighboring powers in the galaxy. The S.I.A, colloquially referred to as 'The Agency', either directly acts, or ignores, upon this information that has been gathered or it is passed onto Starfleet Command and in some severe circumstances directly to the Federation Council.

Starfleet Intelligence Agency Operatives are highly trained and recruited from the 'best of the best' within Starfleet, from whatever walk of life these Intelligence Operatives thrive on challenges and have excellent judgement and problem-solving skills as well as high observational skills and dedication and loyalty to the Federation and their work. The can-do high-calibre approach from the S.I.A training program produces a highly effective organisation.

All Starfleet and Federation personnel know the Starfleet Intelligence Agency exists. However, the operations the S.I.A perform are still highly classified, and only Officers with a need to know basis are informed of what occurs in the 'The Agency'.

The facility itself consists of a central building where most of the administrative work is performed as well as some other facets of the intelligence operation. Surrounding this building are dozens of others dedicated to other necessary functions of the various departments with Starfleet Intelligence, including large hangars to store, modify and service the various auxiliary craft at SIA's disposal.

The entire complex is surrounded by a 10 meter tall wall with only two entry points controlling ground level access. The air space around the complex is tightly controlled by Starfleet Intelligence directly and there are several transport inhibitors in operation at all times.

Starfleet Intelligence existed prior to the formation of the United Federation of Planets in 2161. It served as the primary intelligence gathering and covert operation arm of Earth Starfleet under the auspice of the United Earth government.

At the time Starfleet Intelligence came from a mix of various major Earth intelligence organizations (CIA, CSIS, MI5, MI6, etc) to form the intelligence arm of the new Starfleet.

While much of that history remains intact in the current organization there are a number of differences. Most notably perhaps is the fact that it is not strictly a civilian organization. Since Starfleet Intelligence is part of the Starfleet military structure the majority of officers are from Starfleet itself but many members, analysts and likely operatives are civilians.

Upon the founding of the Federation, Starfleet and its structure were adopted as the primary exploration and defense organization of the new government. As a result Starfleet Intelligence expanded as well, incorporate personnel, technology and techniques from the other founding members.

For much of its history with the Federation, Starfleet Intelligence operated mostly behind the scenes, gathering information and preventing disasters. In more recent years the organization has begun to expand its resources. While it always operated a small set of ships, usually mostly shuttles and runabouts, there has been a big push in the last few years to expand this fleet. The exact extent of this is of course, strictly classified.

Starfleet Intelligence Command is the top level of the S.I.A and is comprised of the Chief of Starfleet Intelligence and his Deputy. As well as these two key figures there are several aides and advisers to both the Chief and Deputy Chief which assist them in the running of the S.I.A. Within this office however there are also a number of other key personnel. The S.I.A Judge Advocate is integrated into the Command level. It is this level which runs the Agency.

The "DI" is the analytical branch of the SIA, responsible for the production and dissemination of all-source intelligence analysis on key foreign issues. This is the department responsible for preparing the daily briefs provided to the Commander of Starfleet and the Federation President.

Within DI are a number of groups focusing on specific areas of interest for Starfleet Intelligence including:

The Starfleet Clandestine Service is responsible for collection of foreign and domestic intelligence, principally from clandestine HUMINT sources, and covert action. It serves as the clandestine arm of the Starfleet Intelligence Agency and the authority for the coordination, de-confliction, and evaluation of clandestine operations across the Intelligence Community of the United Federation of Planets.

The Special Activities Division (or sometimes just Special Division) is a division of the Starfleet Clandestine Service, responsible for covert action paramilitary operations, the collection of intelligence in hostile and/or denied areas and all high threat military and/or intelligence operations when the Federation government does not wish to be overtly associated with such activities. As such, members of the unit, when on missions, normally do not carry any objects or clothing (e.g., military uniforms) that would associate them with the Federation or Starfleet. If compromised during a mission, the government of the United Federation of Planets may legally deny their status and all knowledge of their mission.

Department of Science and Technology (DST)

The Department of science and Technology creates and applies innovative technology in support of the intelligence collection mission. Like past intelligence agencies, the SIA has always had a strong interest in how to use advances in technology to enhance its effectiveness. There are two main goals for this interest: to put the technology and techniques to its own use, and to counter any new technology other hostile governments may develop.

The Department of Support provides essential "housekeeping" administrative functions, but in a manner consistent with the need to keep their details protected. These include personnel, security, communications, and financial operations.

DS is broken down into several smaller offices based on role and purpose:

Configuring and maintaining the phyisical equipment used by the agency.

Starfleet Intelligence is a member of the Joint Special Operations Command, JSOC for short. The JSOC is a joint operation between Starfleet Intelligence, First Force and the MACOs (Military Assault Command Operations) where they pool information and resources with the goal of increasing the effectiveness of all missions.

This category of operation covers the monitoring of unfriendly military Fleet movements, the strength of the Fleets, the location of bases and ground forces concentrations. This can reveal their strength and capabilities to wage war. These are parameters by which often the intent to wage war can be measured. Best achieved by being a watcher, the use of listening posts and monitoring stations. Information can be gleamed from any source including commercial traffic tactical scans. Border patrol sensor readings. On occasion, if sanctioned by SICOM, a clandestine cross border operation can be launched. This is co-ordinated by an Intelligence officer who is assigned to a sector with a small support unit.

This category covers the monitoring of military technological development of friendly and unfriendly species or enemy factions. Normally Intelligence operatives using an undercover or clandestine type of operation gather this type of information. This would be specific to a technology that gives an unfriendly or a dangerous faction the ability to commit mass destruction or hold a significant technological advantage over the Federation.

This covers the investigation of unfriendly technology or artifacts. The aim is to ensure that Starfleet have no surprises in the field of combat. That they are aware of the unfriendly species combat capability and ability to detect cloaked ships or the like. This is a constant work in progress as unfriendly species introduce upgraded or new systems.

This is usually a mission triggered from Federation council policy. The intelligence officers locate to a friendly non-federation species to assess their ability to defend themselves from a potentially aggressive neighbour. This will often be an up front raconteur prior to the arrival of First Force or a MACO unit which is assigned to provide training and tactical assistance for that species. The information gathered ahead gives the units valuable insights into the type of mission they are embarking upon. This covers cultural information as well as tactical.

Occasionally SICOM may sanction a mission whereby a team of Intelligence operatives are sent into hostile situations to either conduct covert operations which are detrimental to the hostile target, or overt operations in liaison with First Force or the MACOs to quickly neutralize a hostile environment based on the casework done by operatives prior to the operations commencing.

This mission type is generally carried out by the SIA support ships that have entered uncharted areas of space. The mission is to gather tactical data of any kind and ensure the information is sent to SIA for analysis and recording.

At the request of Starfleet, the S.I.A can be directed to gather data on a specific group, faction or species that have a military intent to wage guerrilla warfare. This will include monitoring movements and infiltration by Intelligence operatives. Often this work is done in conjunction with First Force or the MACO Recon Unit. In many cases the intelligence officer will assist during such Direct action missions as long as the officer will not become compromised in doing so. 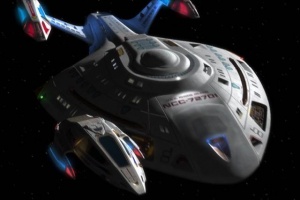 Starfleet Intelligence operates a relatively small but effective fleet of starships dedicated to various aspects of its operations. Information about these ships, including their names, registries, and crews, are tightly controlled as they often contain sensitive materials, technologies and individuals with a high level of knowledge of intelligence operations.

Only a few of these ships are authorized to identify themselves as Starfleet Intelligence ships, though their specifications and missions are still classified. Some of the known Intelligence tasked starships are:

These ships are made known to other Starfleet Commanders and tactical officers with the necessary clearance levels so that those officers may request location specific intelligence information in real time which can often be more efficient and time saving than contacting Starfleet Intelligence through Starfleet Command channels, especially in more remote locations such as the Gamma Quadrant.

These ships are capable of gathering the necessary intelligence themselves or tapping into the tightly secured intelligence network to retrieve the information requested. Information will be provided to the requesting officer appropriate to their level of security clearance.

In this way the known components of SIA's fleet can act as regular scouts for information concerning military movements, intercepted communications, and any other information items deemed worthy by Starfleet Intelligence.

Ships operating within Starfleet Intelligence often run without transponders or with altered signals to mask their true identity.