A privately-owned Starbase located near the Gorn Confederacy, Tala Czar is a heavily guarded station which caters to the whims and desires of its extremely wealthy clientele by way of the slave market that it operates, upwards to a 1000 poor souls at any given time.

Though the 'slaves' are used for a variety of purposes not unlike the Orion Slave rings, the primary attraction is the Arena, where brutal gladiatorial matches are held between captured slaves for the drawing entertainment of the rich and detestable of the galaxy's 'high but nefarious' society.

Tala Czar has only been in existence for a few years, appearing not long after the end of the 2nd Dominion War. During the last days of the war, the Krivaldi Empire inexplicably turned on their Dominion allies and began to attack all Jem'Hadar wings operating within the Taurus Dark Cloud, with only two Jem'Hadar fighters, on a recon mission, surviving. The Vorta in command of the mission, Castus, intercepted a Krivaldi military communique reporting all Dominion ships in the region destroyed.

Cut off from all other Dominion forces and temporarily reported dead, Castus had little time to make a decision. Having grown disillusioned with the war and his gods, the Founders, Castus calculated it was time to break those archaic ties and begin anew on his own terms. He presented his Jem'Hadar soldiers with false orders that the Founders had ordered them to remain in Beta Quadrant in an infiltration operation. With their obedience assured, the two fighters departed for the outskirts of Federation space.

There, utilizing raiding tactics, they began to target and capture refugee and supply vessels whose disappearance could easily be credited as casualties of the final days of the war. With a small but growing forced workforce, Castus began construction of the station that would soon become Tala Czar, located in a star system near the Gorn Confederacy. By the time the Gorn became aware of this operation, Castus had begun to make enough credits to pay for the Gorns' allowance, and even some minor protection from unwanted prying eyes.

When one hears the name Tala Czar, they think of one of two things: a high-priced resort with violent combat sport and other 'distractions,' or a heavily guarded slave prison that is an affront to sentient life everywhere, depending on which side of the station you happen to find yourself on.

For the resort, only the wealthy can afford to even know its location, let alone garner the invitation necessary to visit the station. Castus himself is rarely seen, acting instead through numerous adjutants in order to protect his identity. If word got around that a Vorta was running Tala Czar, he knew certain powers would drop the pretenses of respecting neutral space and come for him, perhaps including the Dominion who thought him dead. Most people come for the gambling, the mingling with the nefarious but wealthy, and of course the Arena. More space is dedicated to viewing the Arena action than any other in the resort levels, with huge screens and club-like locals dotting the upper levels with various relevant statistics and odds of betting. 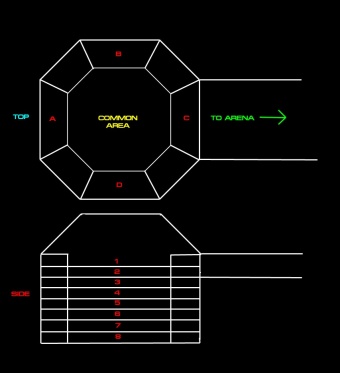 Below the guest levels, Tala Czar becomes a different beast altogether. Four pylons jut out of the lower levels, each housing hundreds of prisoners kept under heavy guard by mercenaries and security specialists. Prisoners are allowed access to common areas in closely-monitored shifts, with one cell block per time out to eat, tend to their physical needs or generally not go crazy from confinement. The shifts are to deter large gatherings and riots, while the regular common area time are to keep them mentally healthy, as with a few exceptions a completely broken slave is not worth keeping.

Each prisoner wears a security ankle bracelet that tracks their movements, monitors their health (in case some decide to stop eating or otherwise require medical attention), and will stun to unconsciousness anyone who attempts to remove it without the triple-encrypted key code, which only the Jem'Hadar carry. The Jem'Hadar, in keeping with Castus' desire to maintain discretion as to their identity, remain largely out sight while providing oversight of the Pylon security forces.

The only time prisoners are allowed out of the Pylons are when guests pay the exorbitant costs for personal interactions, such as escorts or servers at a party, or when they are called to fight in the Arena.

The Arena is the heart of Tala Czar. Here, heroes are made and the weak are vanquished. The blood lust of the massed spectators is sated and the money that keeps Castus and Tala Czar protected keeps rolling in. Some less moral worlds even pay heavily to have the events broadcast to them. For most spectators, it's the best in entertainment. If they know the source of the combatants, they either shut their eyes to it or simply don't care about such things.