Generally kind, but sharp. Gentle but direct, he sees every opportunity to converse with someone as a learning experience. Tristan is very much the man you'd expect to find when suddenly reentering the world after 8 years. His words are chosen carefully, and his personal information is closely guarded. Not that anyone he met would feel like he was keeping secrets.

Tristan is the younger brother of Landon Neyes, formerly Landon Eirlon Irelle. Upon his death in 2414, Tristan was called to take the Neyes symbiont in his place. The specifics of this choice are still being uncovered.

Tristan narrowly escaped the assassination that claimed the lives of his parents in 2406, and was saved by a Trill special ops agent who then took him into hiding. During the eight years of his disappearance, Tristan has gained a varied set of skills. 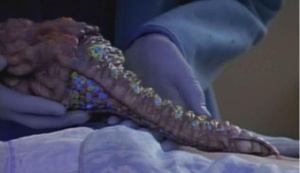 The Neyes Symbiont before transfer to Landon.

The Neyes symbiont is by no means a wholly humble creature. While the women in the Neyes line seem to be far more controlled than the males, there is still a general agreement that the level of confidence gained with Neyes is far greater than that of other symbionts. Many of the individuals joined to Neyes found that their personalities clashed (including Taylor, Landon and Jazni) even after extensive testing by the Trill Symbiosis commission, although it has never developed into a serious problem. This may be due to the ancient nature of the symbiont, and many Trill specialists argue that the difficulties faced are due to cultural differences from the disparaging timelines Neyes has seen. Being nearly 800 years of age, Neyes is much older than many of the other symbionts, it has therefor seen a vast array of changes in the Trill culture since its birth.

Like many well-aged symbionts, Non-Trill Telepathic contact is strongly discouraged, as unforeseen side-effects for both the host, symbiont, and telepath could be experienced. Many races struggle to traverse the complex and highly sensitive mental structure of elder symbionts, as they themselves communicate electro-telepathically. While all hosts are trained to wall themselves from telepathic contact, Trill are not specifically able to block a mental probing or invasion.

Landon attended school with his younger brother as far as they were allowed, as the educational opportunities on a vacation world were few and far between. Raised on the standards of Ferengi principles of learning, Landon was thoroughly versed in business and finance, as well as personal/public relations and staffing. With the lives of families on Cesparia usually leading to following their parent's footsteps in service, it was necessary education for the foreseeable future. Landon's relationship with his brother could only be described as two of a kind. While Landon kept a quiet and awkward stature in his youth, Tristan was a wild force to be reckoned with. They would often play tricks on the Ferengi socialites and commerce officials together, always managing to stay one step ahead. Of course, Tristan was always the mastermind. Later in his life, Landon would shape himself to more closely mirror his brother.

Landon was Captain of the USS Vindicator for just short of a year, when their assignment on Notura claimed his life. His burgeoning relationship with then First Officer, Commander Rochelle Ivanova, left a scar on the young woman. Landon was able to meet Tristan again shortly before passing, then he slipped back into a coma.

Taylor was a man actually quite similar to Landon. Personality wise, Taylor was a steadfast, happy young man. As eager to join Starfleet as he could possibly be, Taylor accepted a position aboard starships primarily as a combat pilot. He served as Chief Helm Officer of several ships during the years of the Dominion war. Towards the end of the Dominion War however, Taylor took up arms as a marine combatant. Shortly after the end of the war, as planets were liberated from under Dominion Control, Taylor was killed on a planet in the Beta Quadrant. Cause of death was a stab wound to the chest by a Jem'Hadar soldier. Landon, who was already fully accepted as a suitable host, was the closest Trill to take the symbiont. The trauma of Taylor's death still resonates in Landon's memories. See Also: Eyes of the Past: Part III

Serving as the Trill city of Rexun's commissioner, Hyane was an extremely confident and strong-willed woman. Her control over the city's functions and runnings was unmatched in the council, and she commanded the respect of many other administrative officials on Trill. She had no children of her own, instead giving her life to her work and dedicating what energy she had to bettering the city's sense of community. She became a Host later on in her life than most of her species, in her 30's, and died of natural causes. Hyane was romantically involved with a man serving as a host to the Daeryx symbiont and that relationship continued through to later hosts for a brief period, despite Landon and the new Daeryx host being men. To this day her strength has been a focal point of Landon's mental focus and concentration. He finds great reassurance in her ability as a leader. See Also: Eyes of the Past: Part I

Toran served as a guide to cargo vessels operating near Cardassian space. Although he did not own a vessel of his own, he was still immensely successful. Since Bajor, and the Trill homeworlds are so close together, it was easy to find work amongst the plethora of traders and commercial organizations in the area. Toran was a bubbly and whimsical man, as expected of someone in his profession. Many of his clients offered the observation that Toran was always able to empathize with people, and could guess what someone was thinking within just a few minutes of meeting them. Toran died of natural causes.

In an age when environmental conditions on planets were not always suitable for colonization, small structures were often created to allow settlers to live in inhospitable conditions. Grecan lived on one of these worlds near the Trill home system of Trillius, just as living in space colonies was a viable way of life for the average citizen. Unfortunately the colonies did not always survive economical depression, and Grecan's was one example. After being joined to Neyes, and transferring to the colony to attend school, the colony fell to hard times. Grecan refused to leave however, choosing to stay in order to help defend his newfound friends in the colony from gangs and opportunist mobsters that took shape. It is here where Landon's skills with knives was born. Eventually he was able to get himself and his group off the colony, and he died of cerebral cancer at an old age. See Also: Eyes of the Past: Part IV

As a woman and as a mother, Ehryn was a bit pushy, but she always acted in the best interests of her family. As a dancer and a gymnast, there was nothing beyond her reach. Ehryn was bestowed with the gift of grace from the moment she was born, and joining only added to her amazing beauty on the stage. She competed in gymnastics competitions across the world, and rarely came home disappointed. Her daughter, Yelaris, attempted to follow in her footsteps, but ended up following the path of science when it was clear she lacked the grace of her mother. Ehryn attended every lecture she could with Yelaris, and did her best to encourage the scientist in her. Ten years before her death, Ehryn was the proud mother of the woman who helped to engineer the first controlled energy fields on her planet. She died of natural causes.

A scholar through and through, Reed was a woman who spent most of her life in the anthologies and codecs of her world's past. In a strange way, it seemed only right that this woman of knowledge be one of the few hosts who melded so well with her symbiont, that it actually furthered her lifespan. The condition is rare, and largely seen as an exceptional honor. Reed was joined at the age of 20, and since that time lived to see another 135 years on Trill. She witnessed the expansion of Trill society into space, and the exploration of their neighboring planets. And saw it all through the eyes of a woman who wanted nothing more from life, than to learn what it was all about.

See Also: Eyes of the Past: Part II

While a first host is often celebrated as a great event in Trill society, both Landon and Taylor have refused to file any information with Starfleet about Corri.