The USS Hades served for several decades on the front lines of Starfleet's main defence fleets. The Hades fought in battle during the First Dominion War along with a large number of other Akira-class starships with distinction.

The last major upgrade for the USS Hades came in 2401 to bring the slightly older class of ship up to current technological standards. Remaining photon torpedo tubes were replaced with quantum torpedo pulse fire tubes, the phaser arrays were upgraded to Type XII and the shield emitters were replaced.

Non-combat systems upgraded included the installation of a new warp core and computer cores along with an overhaul of the EPS network.

The USS Hades was decommissioned and placed in the Starfleet Surplus Depot Z15 at Qualor II sometime prior to the Second Dominion War.

As the ship was decommissioned, deuterium and anti-matter supplies were removed as well as the reactors for the impulse drives. In addition, other volatile materials were removed from the ship for storage including torpedoes and probes.

When Utopia Planetia was destroyed at the beginning of the Second Dominion War, ships in reserve were cannibalized for parts to outfit other active ships for the war effort. As a result, the Hades and many other ships had key components removed, including but not limited to; warp coils, torpedo launchers, gel packs, and EPS components.

After the destruction of the USS Vindicator at the hands of the Vanguard in late 2410, the USS Hades was re-activated as a replacement vessel for the crew. Previously removed parts were located by the Zakdorn and shipped to Starbase Versailles for re-installation into the old Akira-class ship.

The ship was placed under the command of Commander Olan Dar, former Executive Officer of the Vindicator.

Several months later the Vindicator was restored and the crew returned to their original ship. The USS Hades was not mothballed again, instead a new crew was assigned. 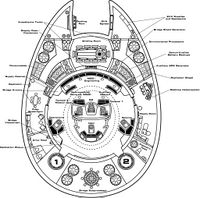