The USS Viminal is the chosen flagship of Vice Admiral Chris Douglas, the current Chief of Starfleet Intelligence.

The USS Viminal was originally commissioned in 2381 as the last in the first run of 7 Vesta-class starships produced by Starfleet.

The Viminal had a distinguished 29 year service before being brought back to McKinley Station for a major refit in 2410. The crew serving on the ship at the time was reassigned to a newly commissioned starship, leaving the Viminal available.

Then Rear Admiral Douglas selected the Viminal early in the refit process to replace an older Nebula-class ship that had been assigned as the Intelligence flagship.

In January 2411 the upgrades were finished at McKinley Station the ship was turned over to Starfleet Intelligence for further modifications and crew assignments.

Named after the Viminal Hill (Latin Collis Viminalis), the smallest of the famous seven hills of Rome on which the ancient city was founded. 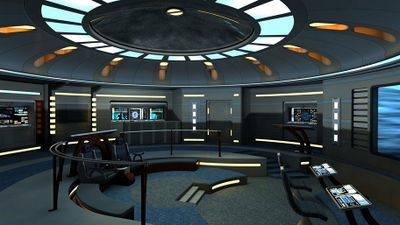 Bridge of the USS Viminal
Retrieved from "http://lcars.ucip.org/index.php?title=USS_Viminal&oldid=13886"
Categories: