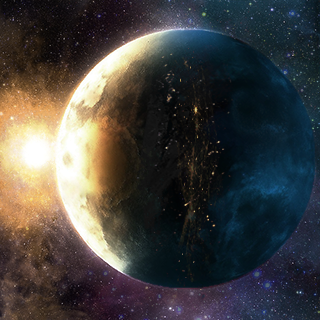 Alexander Valkarria was born on the unnamed planet NGX21107 on the edge of Federation space. As a result of the planet’s dark, dusty soil, wind, and moisture the planet was nicknamed “DarkMist” for the black dust storms that cover large portions of the planet’s surface. Consisting of mostly deserts and frozen wastelands the two extreme climates are separated by a cool, temperate zone that rings the tidally locked planet. Rich in a variety of heavy metals, minerals, and natural resources the planet is home to several large mining operations. Corporate mining operations span the planet's habitable belt at its center however some operations extend into the planet's more extreme zones of ice and desert.

Alexander Valkerria was born on DarkMist to hardworking, tough, frontier parents working for one of the three major mining corporations on DarkMist. Life on the planet was harsh at times, but with difficult challenges came rewards. Despite the hardships on the frontier planet the tight-knit colonists were hard working, cheerful people who toiled to make a living and a life on DarkMist.

On Stardate 23XXXX.XX, DarkMist was attacked by a notorious group of outlaws known as the Bloodstar pirates. The pirate faction preyed upon colonies, settlements, and shipping along the outer edges of Federation borders where defenses were minimal and Starfleet’s presence was light or nonexistent. Without warning, Bloodstar crew beamed raiding parties to the surface demanding supplies and equipment from the lightly armed colonists who lived on the outskirts of the heavily fortified mining operations owned and controlled by the various mining corporations.

Corporate officials determined not to incur the wrath of the pirates remained neutral during the encounter engaging their heavy shielding systems and locking down their mining facilities. Workers, miners, and colonists were left alone to deal with the pirates, their threats, nad demands. Violence erupted when one of the pirate crew shot and killed a colonist as an example. While lightly armed, the colonists, many skilled in fighting Darkmists’s hostile life forms, opened fire on the pirates killing several of them in the initial attack. Fighting escalated with both colonists and pirates paying a heavy toll in life. The pirates quickly retreated fearing the ferocity of the colonist’s reaction.

The pirate commander enraged at the colonists’ defiance opened fire from orbit his small armada of ships pummeling Colony 2. While the mining corporation facility was able to absorb the attacks due to heavy shielding, the colony itself was set ablaze. After nearly an hour the mining corporation officials, caving under intense pressure to act, finally activated its weapons and drove off the pirate fleet but only after it had managed to exact a catastrophic toll on the colony that had opposed them. 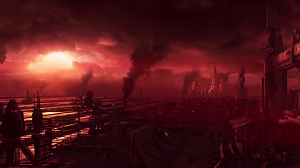 Little remained of the colony; its buildings, dwellings, homes, shops, and town square had been obliterated by the orbital bombardment. There were few survivors of the massacre. Alex’s parents, who had taken up arms against the pirate raiders, had been killed in the orbital attacks. Alex survived the onslaught but had been seriously injured when his living quarters collapsed during the bombardment. Search parties a day later found the boy face down in the black dust of the street barely clinging to life having clawed his way out of the wreckage of his home.

Two weeks later, Alex awoke in the infirmary of the mining corporation where he was tactlessly informed of the colonies destruction and the loss of his parents. Unable to walk, his injuries still severe, the boy was forced to deal with injuries, cold corporate officials, and the loss of his family. NeoDyne Heavy Industries, the corporation who had failed to respond to the pirate threat and as a result lost two thirds of its employees and maintenance staff now toiled over what to do with the survivors, namely with Alexander as they possessed no facilities for caring for or raising children.

Commander Erza Xalion, a retired Starfleet security officer, who had lost her husband and son in the attacks had been part of the search party who had found the boy had kept tabs on the youngster having been impressed by the boy’s strength and determination given the wounds he had received. Personally devastated by her own losses and unwilling to see another life thrown away by corporate indecision and idiocy, offered to care for Alexander as his guardian. Neodyne officials were all too happy to grant her request as it removed one of many liabilities with which they had to contend as a result of the pirate attacks.

Alex gazing into the skies of his home.

Xalion took Alex in helping to nurse him back to health. Alexander quickly grew to despise the pirates who had destroyed his life and killed his parents. He vowed to one day track them down and bring them to justice at any cost. Sensing the boy’s determination and reckless unwillingness to follow authority which he blamed for allowing his parents to die – Xalion offered to teach Alex how to defend himself and protect others using her extensive skills and training in Starfleet.

The two, while sharing a sometimes tenuous relationship, each grew fond of the other. Xalion was the mother Alex had lost and Alex was the son that had been taken from her.In the years that passed, Alex excelled at hand to hand combat and became especially proficient in phaser marksmanship. Winning several local tournaments and awards for marksmanship, Alex was widely regarded as one of the best shots on the small planet.

As the years passed, Alex yearned to leave DarkMist rejecting any suggestions of working in planetary mining operations . Xalion often caught the young man staring up into the sky. She convinced herself that Alex dreamed of a better life beyond DarkMist, but she secretly knew Alex’s heart and mind were firmly set upon finding the pirates that had killed his parents and the other colonists and someday exacting revenge.

Unwilling to take work in mining industries or work for the corporations he blamed for his parent’s death, Xalion repeatedly suggested he join Starfleet. She hoped that the discipline and purpose she had found in its ranks would help free Alex from the shackles of vengeance and hatred. With a letter of recommendation from Xalion,

Alex applied to the Academy and was later accepted.

Alexander was an excellent student however made few friends choosing instead to devote all of his time and effort into learning and honing his skills. As his senior year drew to a close, Alex decided to apply to Starfleet Intelligence. He was certain Starfleet Intelligence would train him with the skills he needed to locate the Bloodstar pirates while also giving him access to information on their whereabouts.

Upon joining intelligence, Alex rapidly climbed within its ranks quickly becoming a skilled and successful officer catching the notice of his superiors. Despite his young age he was transferred to an elite intelligence unit codenamed: Phantom Squad.

It’s members known as ‘phantoms’ were highly skilled, elite intelligence agents capable of conducting Starfleet’s most challenging and demanding missions. Their skills and training gave them the ability to conduct operations without being seen, heard, or detected.

As a consequence of joining the phantoms, Alex was required to change his surname to conceal his true identity and prevent enemies from using loved ones, family, and friends against them in their profession’s silent and clandestine war against enemies of the Federation. Alex Valkarria became Alexander Canaris turning a page on his life from what had been to what was.

The bond shared between team members had to be earned, but Phantom squad members trusted their fellow team members with their lives. The trust that was demanded and given by its members provided Alex a family of friends he had never known. Time passed. Alex both saved his team member’s lives and also was saved by them countless times on difficult assignments. Regarding his closest friends as family, Alex was inseparable from Lt. Gray Arcwind and Lt. Lyra Cortana. They were the brother and sister he never had. 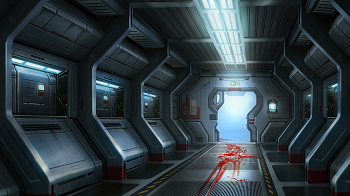 The three phantoms were widely regarded as the best undercover intelligence officers in the fleet however this triad of solidarity fractured over time as both Gray and Alex slowly and secretly developed feelings for Lyra. Their rivalry over her affections grew until it became a wedge pitting blood brothers against one another.

Alex eventually fell madly in love with Lyra and contemplated giving up his career and his bloodlust for revenge against the Bloodstar pirates to be with her. He professed his love for her which she returned having secretly longed for his affections as well. Knowing that any outward signs of their relationship would damage their status and careers the two kept their now intimate relationship a secret. Despite their best intentions they were unable to hide their love from Gray who eventually learned the truth.

The revelation led to a vicious confrontation between Gray and Alex. The two fought each other to a bloody stalemate each requiring several days in an infirmary after the confrontation.The solidarity of the Phantom Three shattered after their clash. Lyra torn between friend and lover retreated from both Gray and Alex unable to handle the situation.

Alex thinking of loved ones he couldn't protect...

One month later while on an undercover operation in Breen territory the trio was betrayed by a close associate and Breen double agent. Exposed and forced to flee from elite Breen counterintelligence forces the intelligence team became cornered in unfamiliar territory having lost their routes of escape to their extraction point.

Facing death and the possibility of being coerced into betraying Starfleet secrets and knowledge, Lyra selflessly sacrificed her life in their escape to save the two men she deeply cared for. Alex and Gray escaped the planet, but their friendship was finished as a result. Each blamed the other for Lyra’s death neither able to forgive the other. Gray Arcwind left Starfleet soon afterwards disappearing completely into the galactic ether. Alex never spoke again with his former friend turned hostile arch-rival.

Over the years Alex heard broken rumors of a mercenary for hire who went by the name of Black Phantom. Nothing was known about the individual. The phantom was untraceable, ruthless, and always completed an accepted mission no matter the difficulty or challenge. Nothing was beyond the phantom’s reach. Assuming one could locate the Phantom and survive the encounter any mission was guaranteed...for a price.

Alex had his suspicions but preferred to leave old wounds, pain, despair, and regret alone where they belonged...in the past.

Alexander possesses slightly higher strength, agility, and cardiovascular abilities due to his youth on his home planet having 1.5 times Earth gravity. The effects however have slowly diminished over time as he has adapted to standard gravity over the years. He often practices in holodeck simulations with increased gravity more so for the nostalgia than any particular physical benefit.

Alexander has an affinity for the game of chess. He also enjoys testing his marksmanship with small arms against others on the firing range and in marksman competitions. He maintains a modest antique collection of 22nd and 23rd century phaser pistols which he claims are far more balanced and accurate than current weapons despite improvements in power and handling.

Alex is also an avid rock climber and enjoys kayaking waterways and experiencing nature whenever possible.