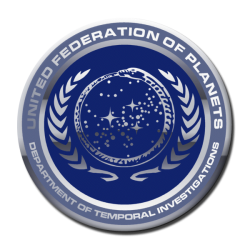 The Department of Temporal Investigations was a section of the United Federation of Planets, tasked with ensuring that time travel events which occurred under Federation jurisdiction were handled within guidelines established to prevent contamination of the timeline. James T. Kirk had the biggest file on record in the Department, with seventeen recorded temporal violations.

In 2373, two investigators from the Department, Dulmur and Lucsly, arrived on station Deep Space 9, to debrief Captain Benjamin Sisko on a recent time travel incident, wherein Klingon spy Arne Darvin utilized the Orb of Time to take the USS Defiant back in time to 2268 in an attempt to assassinate Captain Kirk. After the interview, Dulmur intimated to Sisko that he did not believe that the actions of his crew while in the past constituted a major violation of regulations regarding time travel.