Archer has been in the Corps since he was legal to join and as such is in excellent shape. He has many light scars from previous battles along with a distinct one on his lower back where he took grenade shrapnel. He keeps his hair short in true Corps fashion.

Rough around the edges from his years in the Enlisted rates, doesn't like being addressed as sir and still has the 'babysit officers' mindset at times.

He has a loyalty that comes from spending most of his childhood in an orphanage and from being around Marines from his mid-teens when his father found him. His biggest weakness in his Betazoid heritage. He is only just recently learning how to use it, having just blocked everything before, and can become extremely overwhelmed.

His biggest ambition is to just keep doing what he loves, which is serving in the Corps. He's not made any plans past that, just taking everything else as it comes.

Archer loves to fly and can be found on the holodeck allot running simulations of both war and civilian craft from all over the quadrants and all time eras. He also loves the martial arts, especially Jujitsu and the Klingon forms, but also knows Kickboxing from the orphanage. 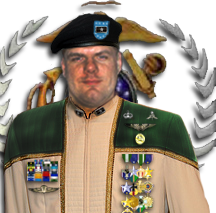 Brigadier General James Archer, MACO Dress Uniform
James John Archer was born on 237910.29 and was sent to an orphanage to live. While living there he excelled in zeno studies and fighting. He was the top boxer in the orphanage. It was while he was boxing in a televised match when he was 14, that his father happened to be on leave and in the stands. His father found hi after the fight and congratulated him and asked is name. When he told him his name his father, after the shock wore off, told him who he was and pulled him out and took hi back to the USS Yamamoto where he served as a Marine Lt. While there he learned Starfleet first hand. When he was old enough he entered Starfleet academy as a marine, following in his fathers footsteps. At end of his 3rd yr. he was in a lounge playing a piloting game when a fighter Instructor came bye and noticed him. The instructor talked to him and convinced him to enroll in flight training. He did and graduated the Academy on star date 240110.11 Had to be sent to Bathesda Naval Hospital on Earth to recover from injuries sustained while defending the Griffin from intruders on SD 240207.26. Upon recovery was reassigned back to the Griffin and reinstated to the rank of Sgt. on SD 240406.05.

Since returning to the Griffin James has fought his hardest for them. He moved through the rates finally making Sergeant Major. He ended up leading the marine unit after the departure of Major Towers, the unit CO. After an undercover mission to a pirate base and leading the marines to capture it the Griffins CO decided to give him a commission to Major and put him permanently in charge of the marines. Along with that he was made the ships second officer, both made him the ecstatic. Heâ€™d grown up on Griffin and now things had come full circle to him. That was short lived, however, as Starfleet decided to transfer him to Eden Fleet Yards as the Hazard Team Leader.

Unhappy as he was Starfleet and Marine commands gave him the choice to follow orders or resign. Given his choices he left to meet up with the USS Tuscarora and take command of it why on route to Eden. Things were pretty boring the week it took to get to Eden until a day before when there was an explosion on the lower decks. This injured two Cadets and Archer went to rescue them. He found one critically wounded and managed to get her to sickbay and stable until they reached Eden. Once they did the first thing Archer did was put in his request for transfer back to his home, the Griffin. In the meantime he picked up his dutyâ€™s as the Hazard Team Leader and was sent to search for survivors after a Breen attack.

After that was done he returned to find his transfer approved and took off before the commands could call it a mistake. To his delight, not only did Captain Fortiscue accept him back but he reinstated him as the second officer and Marine Commander. Archerâ€™s first assignment back was the evacuation and defense of Zetari station against a mechanical race known as the Zybor. Durring this mission he was sent with a rescue team to rescue the Fighter Group Commander, Lieutenant Colonel Roberts. On the way up his team was stopped by a force field so they went back to find a way to shut it off. Among those on his team was the station Commander, Commander Kaye, so he sent them on ahead to make sure she stayed safe why he disabled the field.

Archer managed to disable it but ended up surrounded by Zybor androids. In an effort to escape he dove passed one but ended up getting shot several times in the process. He got away but lost consciousness until three days later when he woke up in the Griffin sickbay. After trying to leave to get back to the station he was informed that the station was gone and he didnâ€™t need to go back. He grudgingly accepted that and and started his recovery from the wounds he sustained. 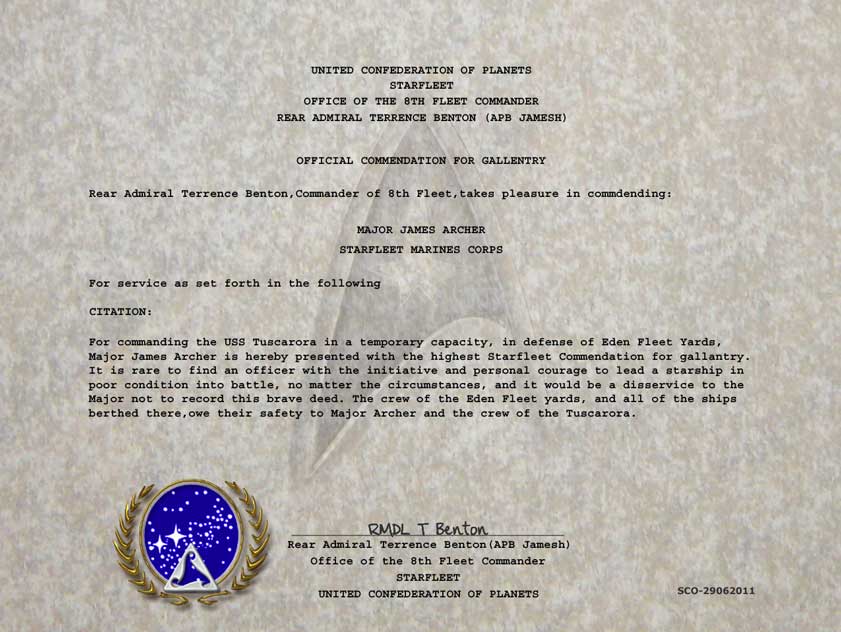