The origins of the conflict could be traced to the Praetor of the Romulan Star Empire and the Chairman of the Tal'Shiar who were upset with the HIM The Empress when she began to take back the imperial power. 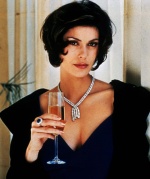 HIM The Empress at her birthday in 2411.

"And now the snakes speaks. We know all about who has the power, isn't that right Praetor,"
—HIM The Empress to Praetor Lhaes tr'Donatra

Ten years after she assumed the the imperial throne, Teelis t'Solos began working with Galae`Enriov Maiek S'T'Hrienteh who was appointed to the billet Galae`Enriov and the Imperial Military Commander-in-Chief on retaining the power that belonged to the Imperial Throne.

Following the meeting Galae`Enriov Maiek S'T'Hrienteh transmitted the orders for all loyal Liehs and gave them the order for them to remove the Tal'Shiar agents and officers on their ships. This was made easier by the fact that Chief of Military Intelligence of the Tal'Diann had a detailed list of these agents.

"Shaoi ben, this afternoon I had a meeting with the Empress. Our young Empress has issued the following order that the Tal'Shair and the Tal'Prai'ex are at this time to disband until reforms has been forth. As such the Gai'Shian, the Rei'Krannsu and her Ih'nneikha Morairi are hereby ordered to secure the homeworld and all other locations. My Leihs, since most of your are in commands of the naetrh'galae (sector fleet) I am ordering you strike at those Tal'Shair on board your stations, your bases and your ships. Hold your sectors until friendly forces can arrived, the stelai ler'lloann (Federation Neutral Zone) will no longer be patrolled until this crisis is over with. Those outpost along the stelai ler'lloann are to go to into lock-down, you will not transmit any beacon and to ignore any lloannen'hiera (Federation vessel) unless they come within a light-year of our border. There will be blood shed because of this order, but it can not be avoided. Urstev! (Dismiss!)"
—Galae`Enriov Maiek S'T'Hrienteh to his officers.

On SD241210.28, the Romulan Commonwealth was founded as a client state of the Tholian Assembly in response to the Tholians going to war with the United Federation of Planets, however Tal'Diann forces have informed Imperial Command that the rebels are still inside Empire space fighting a pitched battle across the quadrant.

On Stardate 241305.23, under his authority as the Galae`Enriov, Galae`Enriov Maiek S'T'Hrienteh ordered Imperial Forces to travel to the Tholian Border via Federation space and informed his officers,"However, if they encounter any Federation ship in distress, then they are to provide assistance, by whatever means."

When the Empress arrived back to take control of her government, she gave no counter order to the military regarding assisting Federation ship.