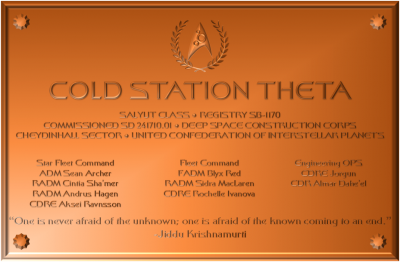 Recommissioned on Stardate 241709.07
Cold Station Theta began its life as a refueling depot at the outer edge of Federation space. After its initial construction in 2371 it went largely underutilized due to the political climate and the outbreak of the Dominion War in 2373. The Federation had shifted from peaceful exploration to a mission of safeguarding against the threat posed by the Founders and their armada. The station was manned with only a skeleton crew during the war, a practice that was maintained for the next forty-five years until a new discovery put the station back into play.

On the edge of the Ul-Kamari Expanse sits the capital of an expansionist civilization known as the Stenellian Ascendancy. It and its people sit on a knife's edge between peace and war with the Federation. With diplomacy in its infancy and often strained, Cold Station Theta has been reactivated, upgraded, and armed for every contingency. As of SD 241710.01 the station was recommissioned, the first of a new class, and now stands ready to face the future.

Cold Station Theta is a multi-mission platform tasked with fleet support for the Cheydinhall Sector of the Beta Quadrant. It is shipyard, diplomatic headquarters, sector headquarters, and quadrant headquarters. The station is armed and supported by three escort level ships should the need arise. A large portion of the primary saucer station is dedicated to the scientific study of the Ul-Kamari Expanse, a large uncharted nebulous region of space just beyond the Cheydinhall Sector. Fleet support is provided by the secondary saucer section which houses refit and refueling facilities. The four yard arms provide new construction facilities and excess docking space when needed. 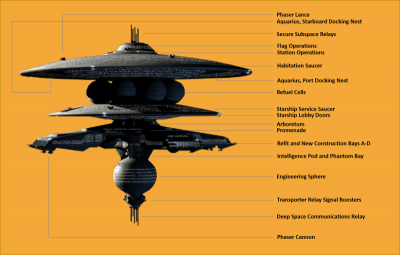 Detailed specifications for Cold Station Theta can be located on the page for the Salyut class. COMING SOON

A deck layout for Cold Station Theta is located here.

At 1110 decks the Saylut Class Starbase is just under the 1200 decks of Earth Space Dock. What it lacks in length, however, it makes up for in breadth with the primary saucer boasting a diameter of 5,400 meters or 3.36 miles compared to the 3,810 meters or 2.37 mile diameter of Earth Space Dock. The Saylut Class more than makes up for its shorter stature in armament, creature comforts, and scientific research capability . Built for fleet support and armed for war, Cold Station Theta is the pinnacle of Starfleet station engineering.

The top of the station is home to the secure subspace relay and its associated equipment. Decks A, B, C, D, and E house the command staff quarters and operation centers for the Beta Quadrant and Cheydinhall Sector, as well as the embassy offices and suites. Operations is located on Deck 1 as are the Commanding Officer and Executive Officer Offices, Conference Room, Transporter Room 1, and the Watch's Lounge. The majority of the primary saucer is devoted to crew quarters, medical and science labs, bays, and offices, and the two Aquarius Escort docking nests. Four turret mounted, double phaser lance arrays provide a 360° firing arch on a 180° plane of fire. Each array is coupled with dual fire, rapid launch, quantum torpedo tubes for maximum impact capability.

The original station was a two ring design. The inner ring contained five large refueling silos while the outer ring housed personnel and provided docking access for ship refuel. When the station was thrust into full service again in September, Starfleet deemed the scale of the original station insignificant for the level of importance the Cheydinhall Sector and local governments held for Federation interests. As the new station was constructed over the top of the old, the secondary ring was removed leaving the large fuel cells at the heart of the new station design.

A secondary saucer was then added below the fuel cells, constructed much the same way as the saucer of Earth Space Dock and containing four large retractable doors which would allow star ships access to the large internal bay for secure docking. Small scale refit and resupply operations are undertaken in this saucer section and support offices for operations personnel are located around the outer perimeter to maximize space. Four turret mounted, double phaser cannons provide a 360° firing arch on a 30° plane of fire. Each array is coupled with dual fire, rapid launch, quantum torpedo tubes for maximum impact capability.

The central support column of the station below the secondary saucer houses the largest Arboretum maintained by Starfleet. Measuring just over a half mile in diameter, the arboretum has been largely designed by Fleet Admiral Blyx Red and Commander Valeese, who have spared no effort in providing a complete and immersive biosphere. Including system compartments this section is more than 30 stories tall and contains varied plant and animal species from across the Federation, many of which are extinct in their native environments. Four large decks spaced five decks apart, and spiraling around the central support and access tube, Provide outdoor recreation areas, aquaculture gardens, and hydroponically grown food sources. A holographic grid matrix provides simulated day and night time conditions and an integrated weather control device even offers rain and temperature variance.

Nestled below the Arboretum is the stations three deck Promenade. This rapidly filling area of the station houses holo-suites, restaurants, bars, clubs, a star lounge, and several consumer shops. If it can be found in the Cheydinhall Sector it can be found on the Promenade of Cold Station Theta. This includes some of the more shady aspects of life in the system.

Below the Promenade lie the four refit and new construction bays labeled A-D. These four bays offer available birthing and command level offices for commissioning crews from early stages of space frame construction thru space trials. Each bay is guarded by two rapid fire, turret mounted, phaser cannons provide a 360° firing arch on a 120° plane of fire from below the bay doors to toward the bottom of the station. When paired with the phaser lance and torpedo systems on each saucer weapons systems have no blind spots and provide excellent defensive capabilities. 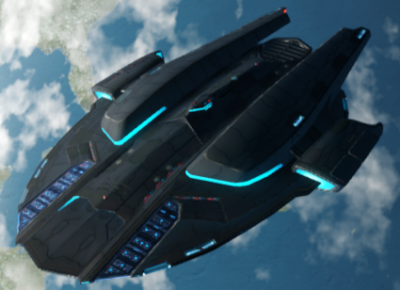 The USS Spector, NCC-63898-A after space trials in the Sol Sector.

The Intelligence Pod spans a 20 deck section of the station and houses all intelligence functions for the station and sector. Comprehensive sensor arrays, transport inhibiting fields, and reinforced armor make this amongst the most secure sections of the station. A twelve deck, secure, holographically disguised, sensor shielded, hangar bay provides the Intelligence Department with enough room to house a Phantom Class Intelligence Escort. The Phantom is fully armed and capable of cloaking. This ability paired with the secure hangar means it can come and go undetected by counter intelligence.

The Engineering Sphere located near the bottom of the station, contains Main Engineering, the four power generators, primary life support, engineering labs, replicator mass storage, and several other key engineering systems. Like Earth Space Dock, the Engineering Sphere may be separated from the station and under maneuvering thrusters piloted away in the event of a immanent reactor core containment failure. Due to the size of the station, one reactor operates solely for the use of weapon and shield batteries. Power from this generator is shunted to auxiliary systems when not needed by weapons or shields. Two reactors are used as redundancies for main systems power and life support though the station can fully operate on one. The fourth reactor is used only for maintenance where shutdown is required on any of the other three.

The transporter and subspace communication relay support systems are located under the Engineering Sphere and are largely unmanned when not requiring maintenance. This section of the station is part of the communication array and is a redundant system used only when the upper saucer system is undergoing repair or is inoperable.

The billeting of Starbase Cold Station Theta (SB-1170) is based on mean operable numbers. A full listing of those billets may be found HERE

We make every effort to keep this roster up to date, but the best way to see what positions are available is always on our site's HERE.