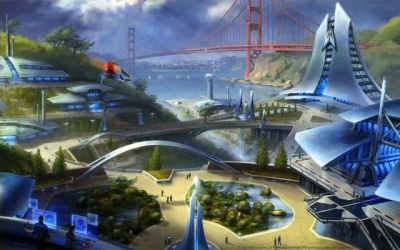 Starfleet Command as an entity is split between two locations. The primary command offices are located at Starfleet Tower in the Starfleet Campus in San Francisco, shared with the Academy. This is where the offices of various heads of department can be found, along with the CinC's office, the Chief of Staff's office, and various meeting suites.

The Operational command facilities for Starfleet Command are actually housed on Starbase One, in orbit around Earth. This is the main drydock and starport facility for Earth, where all visiting Starships are berthed. This super station co-ordinates all Starfleet activity across the cosmos. There are auxilary offices for the CinC, Chief of Staff and the other Senior Division Heads, should they need to be used.

The Marine Corps has offices in the Starfleet Campus, as do other agencies, but not within Starfleet Tower itself.

There are emergency facilites for Starfleet Command in the event of loss or disaster. One is in Australia, and there are other underground facilities on the core worlds of the Federation - with designated 'succession' officers in place to assume command of Starfleet should the primary facilites fall, and the appointed heads killed or incapacitated. For example, should Earth fall, all Starfleet command and control would go to the secure facility on Alpha Centauri.

Following the devastating attacks on Earth during the 2413 "Siege of Sol", the Starfleet Tower and Campus were heavily damaged. 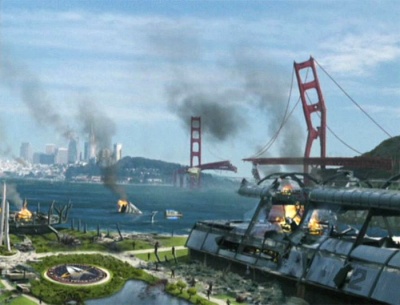 With an organization as large and wide-spread as Starfleet, a definite hierarchy exists in the Chain of Command from the new trainee to the starship captains, to the fleet commanders, all the way up to a centralized command staff which itself is headed by a single senior officer. Though Starfleet's command can be traced up to one officer, it takes the entirety of the Starfleet Command Division to actually run the massive and innumerable resources and ventures of Starfleet.

Starfleet is headed by the Commander-in-Chief of Starfleet (or more commonly Starfleet CinC for short), who is generally nominated by the President of the Federation and confirmed by both the Federation Council and the Starfleet Admiralty Board. The next in line of command is the Chief of Staff of Starfleet, who is appointed by the Commander-in-Chief and likewise confirmed by the Admiralty Board, and is generally tasked with overseeing and managing the Staff & Admiralty throughout Starfleet and is tasked with managing the various divisions and departments at Starfleet Command.

At this point the Chain of Command diverges between active Fleet assets, which are commanded by the individual Formation and Geographical Commanders, headed by the Chief of Starfleet Operations, and all non-Fleet operations resources, which are commanded by their respective Division Directors or Heads under the direction of the Starfleet Chief of Staff. Naturally, there is considerable overlapping between them, and so effective working relationships are expected and encouraged between the section Commanders to ensure the smooth running of Starfleet as a whole.

The whole entity of Starfleet Command, is often referred to as "The Admiralty", which is a term derived from older naval times, where a country's naval command was referred to as the Admiralty. Whilst you do not need to be a flag officer to serve in the Admiralty, you will be known as an Admiralty officer.

At present, Starfleet has multiple vessels, colony's, starbases, outposts and facilities. All of these are managed administratively by Starfleet Command. Under the umbrella of Starfleet Command, you will find the Fleet Staff - who manage day to day operations of the fleet.

The fleet itself is operationally split into formations and geographical commands.

Individual Task Forces are given numerical designations, from which all smaller formation structures base their own numerical designations upon, based on the order of their formation, which often times will also conform to a general regional location as the need for more Task Forces can be proportional to the amount of territory Starfleet needs to cover. This, however, is usually coincidental and is by no means an operational policy.

When the fleets are called into action they are generally organized into groups for a specific purpose, usually strategic, and these organizational groupings appear and disappear frequently based on the conditions and demands placed upon Starfleet. So, Starfleet is considered the 1st Fleet, which would have the designation (1) while a Task Force within 1st Fleet would have a subsequent numerical designation, such as (1.1). A Task Group within a Task Force would share it's parent formation's designation with the added subsequent number, such as (1.1.1). Smaller formations such as Strike or Patrol Groups do not use numerical designations, but rather just their Group names as they are too small to be deployed too far from the parent group in most cases.

Below are the standard Formation guidelines of internal Fleet structures, though quite often situations will require that some exceptions be made to accommodate the circumstances.

Geographical commands are officers who are responsible for the operations of Starfleet and other fleet organisations in a specific area of space. These are broken down into four key sizes.

A Sector Command is the command of a specific sector of space, such as the Zetari Sector or the Bajor Sector. The officer assigned to this position is responsible for all vessels and facilities in this area, and usually commands all small formations attached to it's command sphere. Larger formations, such as Battle Groups, Task Groups, Task Forces and Fleets do not fall under the control of Sector Command.

A Sector Quad Command is even larger still, with the command of four sector blocks, giving the officer in question command over eight sectors of space. This is normally a supervisory position to command sector commanders and sector block commanders. However, it is possible in larger expanse areas, that a Sector Quad Commander has no subordinate Sector Commanders, and is the operational commander for eight sectors. This does tend to be somewhat exceptional, or in areas of few assets.

A Quadrant Command is full command over all forces in a specific quadrant of the known galaxy. The Alpha, Beta, Delta and Gamma Quadrants all have their own assigned commanders to supervise all operations within them. They report directly to the Commander-in-Chief of Starfleet.