The USS Medusa is a Prometheus-class starship. One of the newer of her class, completed shortly after the start of the Second Federation-Tholian War, Medusa has been assigned to the Gamma Quadrant, equipped to handle most challenges of the Quadrant has to offer including scientific, diplomatic, and military.

Life for the USS Medusa began as Build Order # 341120 during the course of increased hostilities with the Tholians in 2413 that resulted in several key losses both in worlds and vessels. With Starfleet's tactical resources stretched to their limits the decision was made to prepare for future potential hostilities and press a more modern Prometheus class vessel into service and with construction officially beginning Stardate 241301.01 on NCC-44641 at Starbase 204-B known more commonly as 'Zetari Station'.

With the USS Mjolnir being utilized by the 5th Marine Expeditionary Unit on Ietia Prime and tensions bordering on full-out war an emphasis was placed on accelerating completion under the supervision of CSYO Commander Alan Walker. Walker's reputation for taking a personal interest in his creations manifested when several unplanned 'adjustments' to the ship's original tactical systems early in the project resulted in numerous complications as the vessel neared completion. Among the most irritating was the inability of the vessel's 'advanced' EMH Mark II to stop talking, forcing Shipyard engineers to take the hologram offline for several weeks. 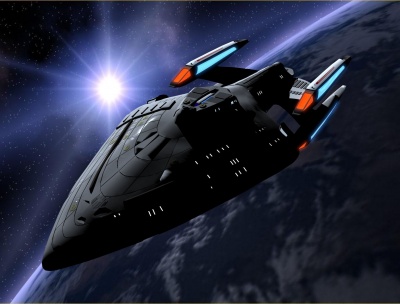 The USS Medusa exiting orbit of the planet.

Problems began to manifest as the ship was assigned to Zetari for her initial shakedown cruise and the vessel encountered unforeseen issues with its most highly advertised feature as the logistics of separating and reconnecting -three- massive independent craft into a functional and warp-capable vessel proved maddeningly complex. While effort and teamwork had made rapid project completion at all possible it could also be argued that shortcuts and cost-saving inherent to both sides was a chief cause in the ship's numerous early flaws. Adding to the challenge were the differences in construction standards and skills between the joint civilian-Starfleet engineering team.

The ship was completed and inserted into the active Fleet on Stardate 231303.31 and christened the USS Medusa NCC-44641 as a tribute to the design's unique multi-vector assault capabilities in the hopes of invoking the spirit of her namesake and the threat posed to those challenging any of the three Gorgon sisters.