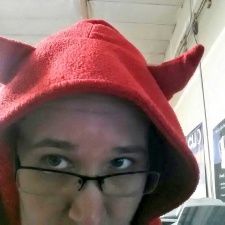 Star Trek was my first Sci-fi love, and while I will admit there are other fandoms that I now love more, it will always have a special place in my heart. Other fandoms of mine include Farscape, Firefly, Doctor Who, and Cowboy Bebop. My hobbies include tabletop boardgaming, tabletop RPGs, miniature painting, and photography. You may be amused by the list of Things Pond is No Longer Allowed to Do in Starfleet. I have been an on again, off again, play by email gamer for about a decade and a half now.

I was originally brought to the UCIP by mooeypoo to play chief of security on the USS Griffin as Amelia Waterhouse, where I served for two years before taking a break from UCIP for another two years. October was responsible for my second coming, this time to serve aboard the USS Vindicator, where I served as her XO, Amelia serving as my character for this role. I have since retired from the org again.

Consult the User's Guide for information on using the wiki software.